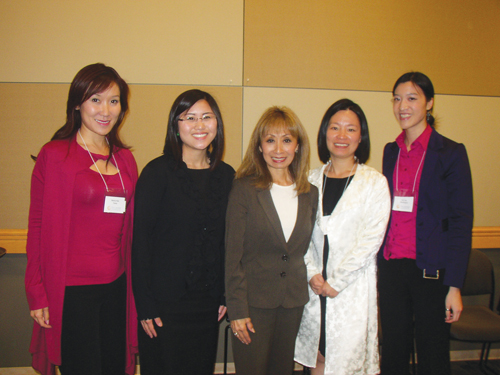 (Reposted from The Redmond Reporter; Photo by Valerie Smick)

Over 200 women of Asian and Asian Pacific heritage gathered in Microsoft’s Conference Center on Sept. 26-27 to network and attend workshops dealing with expanding leadership skills and strengthening community through positive change. Participants traveled from as far as New Jersey and Hawaii to join the two-day conference hosted by The Center for Asian Pacific American Women (The Center).

“It is truly inspiring to see participants spanning three generations of women in their 20s to their 60s finding relevance in this meeting and discovering new ideas to make a difference, while giving back to the community,” said Rosemary Abriam, president and CEO of The Center. “Based on the friendships and solidarity that emerged from these past two days, I’d say the Summit was an exceptional success.”

Phyllis Campbell, chairwoman Pacific Northwest, JPMorgan Chase & Company kicked off the Summit with a keynote address on “Living the Whole Person Leadership Model.” Joined by Phyllis Wise, provost and executive vice president, University of Washington, the two led a panel discussion on bringing your “whole self” to the workplace.

About 36 Asian American women business and community leaders led the plenary session, panel discussions and 15 workshops. One of the most in-demand workshops was “Speak to Persuade: When Being Informative is Not Enough,” offered by Vanna Novak, president and founder of Speak to Persuade.

“I know that Asian women are striving to break the “bamboo ceiling” and stereotype of being timid and non-assertive in business settings,” said Novak who is a Japanese-American. “Part of being a leader is to be able to exude credibility and competence while building an emotional connection with the audience. Learning to speak persuasively is a crucial leadership quality that is a central take-away in my workshops. ”

More than 40 women participated in Novak’s workshop, which included critiques of participants’ videotaped presentations. During the two-and-half hour session, participants learned how the nonverbal impact of presentations such as voice, facial expressions, body movement, posture and dress can influence more than 50 percent of the total input of the presentation.

Novak described how within the first ten seconds of meeting a speaker, the audience creates a first impression based on factors such as color of skin, gender, age, overall appearance, facial expression, and eye contact (in rank order). Women attending the workshop were seeking tools to break out of existing stereotypes based on their gender and race.

The Center is a national nonprofit organization dedicated to addressing the challenges facing Asian Pacific American (APA) women and nurturing stewardship within communities by advancing leadership and creating a supportive network of APA women. Microsoft, State Farm Insurance, Nordstrom and Southwest Airlines were key sponsors for this Summit.